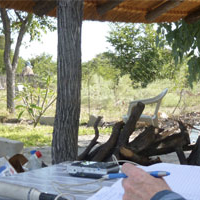 Professor William B. McGregor is an Australian-born linguist who works at Aarhus University in Denmark. He has published various books on linguistic theory and Australian languages, which include Semiotic Grammar (1997), Verb classification in Australian languages (2002), The Languages of the Kimberley, Western Australia (2004), Linguistics: An Introduction (2009, 2015 … ↪