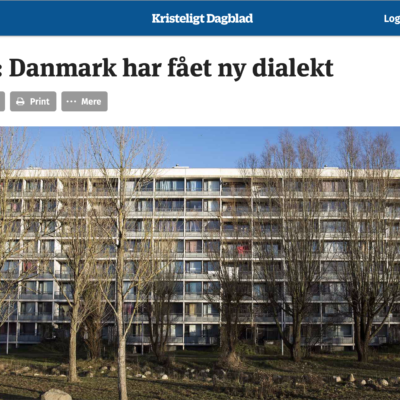 The reason for all of this was a short interview in the Danish paper Kristeligt Dagblad where I explained that despite Danish dialects being used less and less, new dialects are simultaneously coming into existence. And that I research one of those, more specifically a dialect in Aarhus Vest (the western part of the Danish city Aarhus). In the words of journalists, this became:

“Researcher: Denmark has a new dialect”

We have been researching these types of new language varieties for over 30 years, first in Stockholm in 1988 and then in Copenhagen, Oslo, Berlin, and several other cities in Northern Europe. In Aarhus, this type of variety was described for the first time in 2002 by Mette Vedsgaard Christensen. So, this isn’t exactly “new”. The Danish radio station P3 joked that when universities call something “new”, we need to account for the tendency for universities to be somewhat behind the curve:

“What universities call new may very well be 20 years old”

The “new” part of this is simply that I call the variety in Aarhus a dialect instead of a sociolect, an ethnolect, or a multiethnolect. I do this on the basis of the fieldwork I have conducted; I recorded speakers to provide a grammatical description of this new variety and discovered that I could mostly find this variety among speakers who had grown up in specific parts of town. In some cases, the specific streets my participants had lived on dictated whether they used the variety or not. My impression was that geographical factors had more to say than for example gender, age, or ethnicity. Furthermore, Mette Vedsgaard Christensen conducted a matched guise-study that showed that otherwise comparable speakers from different cities do not recognize the Aarhus V variety as part of their dialect.

So, what does this dialect sound like? In the media coverage of it, they often focus on its new words: Eow, yani, wallah, etc. My research does not revolve around words, but focuses on less tangible properties, such as word order and prosody. This new urban dialect makes four kinds of word order available to its speakers, instead of the three options that are used in the standard version of the dialect spoken in Aarhus. We can illustrate this with the sentence ‘Jeg ringede til banken i år’ (I called the bank this year):

Can also be expressed as:

These four constructions have minor differences in linguistic meaning, which can be used to convey different points.

My analyses are always based on recordings of natural interactions, instead of, for instance, interviews or conversations about pre-determined topics. These recordings are often carried out by informants independently; they are asked to carry a voice recorder for an extended period of time to record situations from their daily life with different speakers and different activities. This type of data makes it possible to uncover small differences in meaning, for example how word order helps the speaker negotiate turns in interaction, evaluate other people’s utterances, and emphasize certain points.

Example 4 comes from a recording where a high school student tells her friends about how much of her debt she has paid off. I år jeg ringede til banken was used in a context where the speaker was telling a long story with many different events, and the example comes right before the main point of the story: That the bank could tell her that her debt had almost been paid off. This enjoyable and surprising piece of news acts as a sort of punchline for the whole story, and the speaker illustrates the approaching climax by using a different type of word order than in the previous bits of the story.

Analyses such as these come into being using the methods of conversation analysis, where we incorporate tiny little elements into the analysis, such as pauses, and overlaps measured in milliseconds. This type of analysis can only be done on recordings of completely natural interaction. In my communication with the press I didn’t quite get to speak about conversation analysis, but the point about the four different types of word order did make the cut. I was really happy about that, because it shows that our research is about so much more than just new words.

Another positive outcome was that one of the news agencies had sent a camera crew to a high school in Aarhus Vest, where the students unanimously agreed that yes, the dialect is used, but it’s nothing special:

“I don’t think I think that much about it”

I couldn’t agree more: That’s simply how language works. The dialect is neither very exotic, nor is it especially interesting. Except for when you ask linguists of course, who love analyzing micro-pauses and speculating about typological connections to other historical linguistic changes.

Ditte Zachariassen is a ph.d-student at the department of linguistics at Aarhus University. 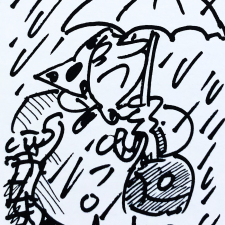