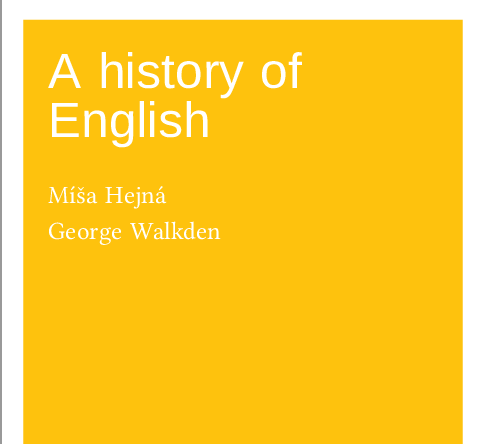 More than 50 years ago, Barbara Strang published her highly innovative book A History of English (1970, Methuen £2.25) which, daringly, began its chronological treatment of the English language in the (then) present-day, with “Changes in living memory” (Strang was born in 1925), and then worked its way backwards. The first chapter in the chronological sequence was devoted to “1970-1770”, and the final chapter covered the period “Before 370”.

The obvious advantage of this strategy is that you can start readers off in a place they are familiar with, and then take them on a journey to increasingly remote and less familiar periods of time. Strang’s way of dealing with this material was an intriguing and attractive one, and in my view it worked very well. I still have the book on my shelves, and consult it rather frequently.

It is therefore no surprise to me that Míša (Michaela) Hejná and George Walkden have now also decided to take the same sort of approach in the new volume under review here, which has borrowed not only Strang’s approach to the subject but also her title, A History of English. Indeed they, or perhaps the publishers, make quite a thing of the way in which the reverse-chronological approach taken in this book sets it apart from all textbooks of the last fifty years – although they neglect to mention both Strang and her 50-year-old work by name.

This first book for fifty years to adapt the reverse-chronological approach is very different in many ways from Strang’s, but it is equally intriguing and attractive, as well as being very useful. I do rather doubt that people reading the new book now will still be be using it as a reference work in fifty years time – it is not that kind of work. For a start, it is not nearly so densely packed with information as Strang’s – it is, after all, intended to accompany a one-semester introductory course on the History of the English Language. The X-bar approach to syntax which is employed here is also unlikely to still be current in some decades time; and the Subject Index is rather rudimentary and so would be unhelpful for reference purposes.

But, very importantly, the book will surely still have a significant legacy in decades to come in the form of scholars and teachers of the History of the English Language, as well as simple enthusiasts for the subject, who will have had their interest aroused by this very readable and enjoyable book. As an introductory textbook, it works extremely well. There is the usual contemporary didactic paraphernalia of “Suggested Exercises” and “Answers to Exercises”, but also a very helpful glossary of linguistic terms, as well as an excellent and very full list of references. Also particularly helpful are the annotated “Recommended Further Reading” sections which accompany each chapter. In addition, the book is very agreeably illustrated with pictures of, for example, ancient manuscripts, and photographs of contemporary signs and notices, as well as maps and diagrams. And there are numerous well-chosen texts which illustrate very nicely the ways in which the language has changed over the centuries at all linguistic levels.

It is also particularly pleasing, given the intended audience of beginning students, that the authors devote space throughout the book to discussing prescriptivism, and to opposing linguicism and accentism. It is unfortunate, then, that they sometimes write “standard English” rather than “Standard English”, thereby missing opportunities to underline the status of Standard English as just one variety amongst many others.

And although they very reasonably write of “Standard American English” and “Standard Scottish English”, they then confuse the issue by also using the term “Standard Southern British English”. They acknowledge at one point that what they really mean by this is “Standard English English” – but in that case why do they not say so?
The authors also too often use the term “British English” in ways that are not really appropriate. The most significant geographical linguistic boundary in the whole English-speaking world today is the one between England and Scotland and, although they do devote some space to a discussion of Scots and Scottish English, the authors’ lumping together of English English with Scottish English does the very highly distinctive Germanic varieties of Scotland no service at all.
Because of the working-backwards orientation of the work, the central chronological chapters of the book run: “Change in English Today”; “Late Modern English 1700-1945” (not “1945-1700”, as Strang would have had it); “Early Modern English 1500-1700”; “Middle-English 1150-1500”; “Old English 650-1150”; and “The Prehistory of English”. The “Prehistory” chapter, stretching back from 600 AD to 4000 BC and beyond, is particularly good – Walkden is an acknowledged authority on Ancient Germanic – and the authors do a good job there of covering topics such as runes, the adventus Saxonum, Anglo-Frisian, the Germanic sound shifts, and Verner’s Law. But all the chapters are good, and the book can certainly be recommended as an introductory text for all students of English Linguistics. 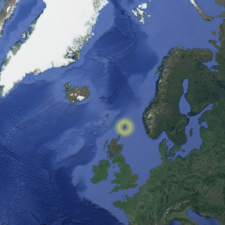