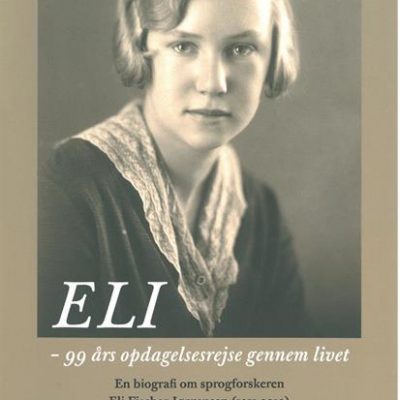 In fact, EFJ would live for another 11 years, and the book that she mentioned, came out in 2001 (Tryk i ældre dansk); she passed away a few months short of her centenary. Her last (original) academic publication dates from 2005, that is, full 71 years after her first published linguistic work. Not many people can look back on such a long career as an author.

The author of the current biography is Gunver Skytte, a linguist herself and the author of several books in Danish for teaching Italian, as well as of a number of academic publications. Previously, she had written a biography of Kristian Sandfeld, another world-famous Danish linguist and a specialist on the languages of the Balkan.

The book under review is not merely an intellectual biography, focusing on EFL’s ideas and achievements; it is just as much a book about EFJ as a person, her engagement in activities outside academia (such as her administrative work for the Danish resistance during World War II), as well as about her scientific  connections and networks. The book is largely organized chronologically, but also contains brief biographies of collaborators and colleagues.

EFJ was a single woman in a predominantly male environment at a time when the field of linguistics still was dominated by men. Already in her high school picture (taken upon her graduation from the Svendborg gymnasium in 1929), this gender inequality is evident: there are only four women against 13 men! From the beginning of her university life, she gained the well-deserved respect of her male colleagues and superiors in the vibrant linguistic milieu of the University of Copenhagen, where, as a brilliant young student, she was accepted as a member of the Cercle Linguistique de Copenhague in 1933, having won a linguistic student contest the year before – only 21 years old. A few years later, in 1935, EFJ won the University of Copenhagen Gold Medal for her critical work on a recent new syntactic model developed by the German John Ries. Her earlier student work on German dialect geography was published as a modest monograph in 1934, and was reviewed by at least seven Danish and international specialists. It was only later that EFJ’s main interest shifted from syntax to phonetics – a discipline in which she ended up becoming one of the leading global scholars.

EFJ was in personal contact with many of the great linguists of her time, both at home and abroad, such as Trubetzkoy, Jakobson, Zwirner, and Fant; many more she met at phonetic and linguistic conferences. In Denmark, she transmitted her knowledge and insight to new generations of Danish phoneticians like Hans Basbøll, Jørgen Rischel and Nina Grønnum.

EFJ herself was a student, and later a colleague of, Louis Hjelmslev, the founder of the Glossematics theory of language, one of the most abstract theories of general linguistics. As Hjelmslev’s junior colleague, EFJ used much of her time discussing the glossematic model with his graduate students in evening and nighttime sessions, brewing tea in her small city apartment; this was in addition to her explaining glossematics to the wider world. This, incidentally, led to the widespread idea that she was an adept of Hjelmslev’s theory – a notion she repeatedly and consistently has denied. Shortly after Hjelmslev’s death in 1965, she wrote several articles about her late supervisor’s theory; in addition, she had provided a foreword to Hans Jørgen (‘John’) Uldall’s Outline of Glossematics (1957) – a work that was to form the first part of a co-authored Outline of Glossematics, whose second part never appeared. She was appointed professor in phoneics at the University of Copenhagen in 1966.

Hjelmslev, at least initially, may have tried to direct EFJ’s work. He did not like for her to busy herself uniquely with ‘philology’; so, even if she was describing concrete historical changes in phonetic perception, he would insist on a more synchronically-oriented analysis of speech sounds. This, eventually, may have led EFJ to start working in experimental phonetics and phonological theory.

In 1931, Hjelmslev, together with his colleague, the professor in French Viggo Brøndal, had started the above-mentioned Linguistic Circle of Copenhagen, of which he was the chair until his death in 1965, only interrupted by the practically motivated interim chairmanship of Brøndal during the years that Hjelmslev was a reader at the university of Aarhus (1934-1937). EFJs first presentation in the Cercletook place in 1933, when she reviewed, together with the founding member Paul Lier, Maurice Grammont’s Traité de Phonétique. Gunver Skytte mentions that the Cercle, in its first decade, was dominated by the often acrimonious discussions between Hjelmslev and Brøndal; when the latter died in 1942, the Cerclechanged, and became more and more a forum for (often glossematically inspired) debate under Hjelmslev’s direction. Upon Hjelmslev’s untimely death in 1965, EFJ became the Cercle’s chairperson (1968-1972); meanwhile, she had also become secretary and later editor of the Cercle’s flagship, the international journal Acta Linguistica Hafniensia, which Hjelmslev had launched in 1937.

The book under review contains many pictures from EFJ’s life and work; it also shows photographs of colleagues (among these, many illustrations by EFJ herself, including pen-and-ink drawings and beautiful water colors depicting Danish and international locations). EFJ was a woman of many talents, in addition to being a hard-working, considerate, and incredibly helpful person, both when it came to advising her students on matters of linguistics or guiding them through personal problems and crises. Although she had considerable health problems herself throughout her life, these did not detract her from achieving the utmost, even if she had to dictate her writings from her bedside.

Reading this book led me to a number of reflections. I have sometimes been speculating about why most Danish linguists of world fame are first and foremost phoneticians. Apart from Eli Fischer-Jørgensen herself, we have e.g. Vilhelm Thomsen, Karl Verner, Otto Jespersen, Hans Basbøll, Jørgen Rischel, Nina Grønnum, to name but a few (notable exceptions are  non-phonologists like Rasmus Rask, Viggo Brøndal, and of course Louis Hjelmslev himself). Perhaps one reason could be that anyone who is able to analyze Danish phonetics and phonology – not only as a native speaker, but as a professional linguist – must belong to the top tier of their profession; as to EFJ, she is clearly among those select few. When I started to learn Danish, I borrowed ten descriptions of the Danish sound system from the library, all of them differing substantially among themselves – except those by Nina Grønnum and Nina Thorsen, who turned out to be the same person! Danish phonology is hard to crack, and no two Danes agree on the Danish system. For children, Danish appears to be among the most difficult languages to acquire.

Another reflection has to do with the completely different academic world in EFJ’s time when compared to today’s. Being a student in Eli’s times was more like an apprenticeship: there were a handful of students who would learn the craft of research from a senior scholar. Today, when study programs close down if they do not attract a minimum number of students (say 15 or 20 per year), university administrators prefer classes attended by hundreds of students. As a result, we observe how hard-core economic thinking and the business community’s interests have replaced the noble goal of scrutinizing intellectual challenges. There simply is no short-term economic benefit in studying languages of the European Union like Hungarian or Finnish, or Old Icelandic (Norse) and Faroese – heritage languages of the Kingdom of Denmark –, or even like Bahasa Indonesia and Malay – closely related ‘small’ languages with over 280 million speakers, which are routinely being dropped from the curricula of major universities world-wide.

In addition, one gets the impression that a high school (‘gymnasium’) education in those days was more geared towards an intellectually enriched life afterwards than it is now. EFJ gained the basis of her fluency in three foreign languages (English, French, German) during her ‘gymnasium’ education; she could correspond, as well as review and write articles in all three languages, allowing her a more direct entrance to academic thinking elsewhere. (In addition, she also reviewed books written in Italian and Dutch.) Today, accessing literature in languages other than English or one’s native language gives almost reasons for suspicion or boycotting, as normal Danish ‘gymnasium’ students rarely reach a level in a language other than English that enables them to read foreign academic literature in the original language.

Another difference is in the role of the media. Newspapers in EFJs time showed more interest in Danish academic matters than they do these days; when EFJ graduated or achieved other outstanding results, the newspapers wrote about her as a talented, promising person. Also, journalists attended and reported on dissertation defenses and routinely reviewed these works in newspapers. Today, this is only rarely the case; the media mostly rely on summaries of press statements on international research, or they only report on scientific achievements when they are mentioned in the New York Times or the Guardian – even when such achievements are due to localacademics.

There is much more that could be said about EFJ, her life and her work, but limits of space forbid. Gunver Skytte has produced a highly interesting and eminently readable biography of a pioneering woman in science, whose contributions to the study of phonetics in Denmark and elsewhere can hardly be overrated; and though many of her students and principal scientific ‘heirs’ have either retired or passed away, there still are third and fourth generations of EFJs heritage around who continue her seminal academic work.

Gunver Skytte’s book is highly recommended, both to the academic community and to the readership at large.

Peter Bakker is not a phonetician, not Danish, not a woman and not connected to the University of Copenhagen. He appreciates the input from Copenhagen colleagues that led to an improvement of this text. 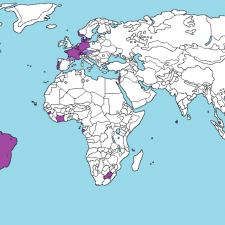