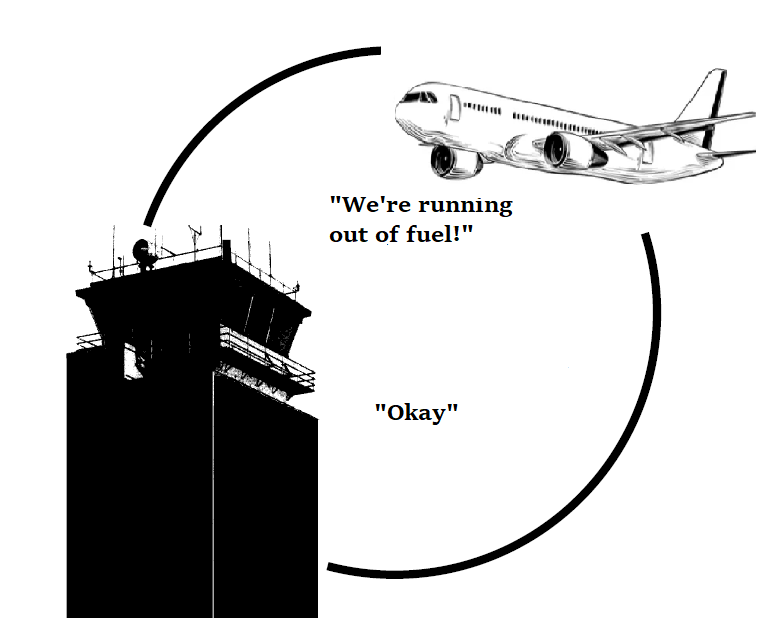 On January 25th,1990 Avianca flight 52 flying from Medellín, Colombia to New York crashed around 30 km from John F. Kennedy airport, killing 73 of the 158 people aboard. The official Aircraft Accident Report subsequently concluded that the main causes of the accident were “the failure of the flight crew to adequately manage the airplane’s fuel load, and their failure to communicate an emergency fuel situation to air traffic control before fuel exhaustion occurred” (National Transportation Safety Board: v). Here, I offer a mini conversation analysis (CA) based analysis of some of the final Pilot-Air Traffic Control (ATC) interactions from Avianca flight 52. The audio was recorded on the Cockpit Voice Recorder aka the black box of the aircraft. The transcriptions in this article follow Gail Jefferson’s transcription conventions. 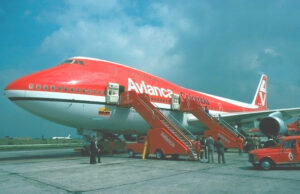 Interactions between pilots and ATC take place in a challenging environment and, contrary to everyday life, misunderstandings or miscommunications can have deadly consequences. The discursive space of Pilot-ATC interactions differs from everyday conversations mainly in four ways: 1) it is highly mediated, i.e., both ATC and the flight crew function as information go-betweens; 2) it is highly regulated, i.e., communications contain a high amount of scripted language (Garcia 2016: 58); 3) it is a stressful and demanding environment, and 4) its primary actors come from different cultures and organizational structures (Howard 2008: 372). In the case of Avianca flight 52 the Captain’s English proficiency was so low that the Co-pilot had to function as a mediator, essentially handling all communications between the aircraft and ATC.

Previous to the following excerpt, Avianca flight 52 had just attempted and failed a “missed approach” which in aircraft lingo means landing a plane manually without instrument assistance. The Avianca flight 52 crew had already informed ATC of their dangerously low fuel levels on at least three separate occasions prior to this missed approach. Note that the line uttered by the Captain (beginning with “(Cockpit)”) indicates that ATC cannot hear it because they only had direct radio contact to the Co-pilot. So, essentially that line is only heard by those in the cockpit.

2 (Cockpit) Captain: tell them we are in emergency

3 Co-pilot: that’s right↗ to one eight zero on the heading

4 Co-pilot: and uh we’ll try once again we’re running out of fuel↘

What is immediately apparent is the mismatch between what the Captain orders the Co-pilot to communicate on line 2: that they are in an emergency – and what the Co-pilot actually says on lines 3-4. On line 3 the Co-pilot issues a confirmation of their heading, thus orienting this part of his answer to ATC’s question-design (Sacks 1987: 57). However, at least one interesting phenomenon happens in the second part of his turn on line 4, which could explain ATC’s seemingly frivolous response “okay” on line 5. In many languages the use of paratactic adjunctions, that is, placing clauses next to each other without a bounding element between them, is suggestive of a sequential or even causal relation to each other (Levinson 1995: 101). So, even in the absence of the conjunction ‘because’ there seems to be an inferred causality between the first part of line 4 “we’ll try once again” and the second part “we’re running out of fuel”, such that the entire utterance suggests that they will try once again because they are running out of fuel. By doing so, the fuel-situation is understated, and ATC’s “okay” can be said to be responding only to “we’ll try once again”. This argument is further strengthened by the fact that a turn-at-talk can always be ascribed at least one action, that is, one main job that turn is performing (Levinson 2013: 107). The “okay” on line 5 suggests that the action being ascribed is that of informing they will try again, rather than informing them that they are running out of fuel.

Around 2 minutes after that transmission, the following interaction took place:

2 ATC: u::h I’m going to bring you about fifteen miles

3 ATC: northeast and then turn you back on for the approach.

5 ATC: is that fine with you and your fuel.

When questions are designed in such a way that they call for either a ‘yes’- or ‘no’-answer, the respondent of that question will tend to pick that response (Sacks 1987: 57). This seems to be what is happening in this interaction. The ATC officer has designed his question in such a way that the obvious response is a ‘yes’-like answer, which is indeed what the Co-pilot provides in the first part of line 6. Another point about ATC’s question worth highlighting is the “with you and your fuel” because what it seems to be doing is downplaying the situation, by insinuating that it’s the Co-pilot’s problem. This is not made any better by the Co-pilot’s response on line 6, which can at best be described as a ‘verbal shrug’. The Co-pilot answers “I guess so” with a rising-falling intonation denoting almost complete resignation, the negative valence of which is then mitigated with the token of appreciation “thank you very much”. Sadly, short moments after these exchanges the plane crashed.

The reader may be wondering at this point why the Co-pilot didn’t simply use the word emergency in any of the communications to ATC? It is difficult to answer that question, and it may seem obvious in hindsight how the Co-pilot should have handled communications – or at least how he shouldn’t have. Analyses of other incidents involving pilot-ATC miscommunications have shown that they were “exacerbated by nonlinguistic factors such as distractions, fatigue, impatience, obstinacy, frivolousness or conflict” (Cushing 1995:2). Pilots and ATC officers are trained to use scripted speech to “facilitate the work of flying a plane” (Garcia 2016: 59) and to “facilitate the flow of air traffic to prevent accidents” (Garcia 2016: 59). The pilots of Avianca flight 52 were concentrating on flying the plane under extreme circumstances: with low fuel levels during a storm. The ATC officers were under extreme pressure, coordinating hundreds of other flights in addition to Avianca flight 52. These non-linguistic contexts influenced the discursive space described above in a detrimental way, thus offering a possible account for why the Co-pilot failed to communicate the emergency in a clear way.

Sacks, Harvey. 1987. On the preferences for agreement and contiguity in sequences in conversation. In Talk and Social Organization (eds.) Graham Button and John R.E Lee. 54-69. Multilinguial Matters. Clevedon.

Sofia Navarro Beck is a MA student in Linguistics at Aarhus University and has recently taken up interest in pilot-ATC communications from a Conversation Analysis perspective. 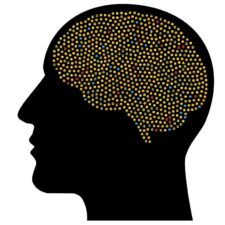